You might end up with an outie when you’re looking for an innie.

There are a couple handfuls of perfectly excellent films I have avoided seeing because, for one reason or another, I already know too much about them. Sometimes a scene or a plot twist or a character seeps into the public consciousness and becomes its most representative, defining characteristic. Sometimes the entire film is referenced and dissected and quoted ad nauseam and completely loses its element of surprise. And while the element of surprise isn’t always an essential criteria for enjoying a film, if you have the choice between experiencing a great film that holds a promise of originality and a great film that has already become lodged in your cognizance, which would you choose?

Based on that rationale, I never felt an incredible sense of urgency to watch The Crying Game. The twist at the end of the early 90s classic thriller has become a cultural punch line and has spoiled the chances of future viewers to authentically experience the film. Monumental twists to end a story are no recent phenomenon, but with the rise of the Internet, social media, and backseat film scholars (*ahem*) there exists a greater risk of having a film ending ruined than ever before. If the surprise of the jaw-dropping ending is removed and the suspense of the unknown is taken away, the audience loses the chance for a completely original experience. For a lover of film, these are the most important of experiences. Those times when you become so enraptured inside the film that all exterior senses of time and space are lost. Those times when the love and the passion and the inventiveness explodes off of the screen and hits the you with the force of a rampaging bull running down a flat-footed matador. And there’s a smile that floats across your face as you mentally recap the events of the film; you’re happy and content to have found another sublime contribution to your personal Parthenon of Amazing Cinema.

Those are the kinds of experiences I crave. Whether they come from a beautiful film, a stunningly complete musical album, a brilliant piece of art, a shocking novel, an enthralling television series, or wherever, the element of surprise is that extra piece that enables something very good to become truly wonderful.

It’s been many years since I first heard about The Crying Game, and I do not remember how I learned of the twist, but ever since then I have made it my absolute mission to avoid learning the secrets of a piece of art prior to experiencing it for myself. Usually it’s not too difficult since the films on my “Must Watch” list are generally not the ones people discuss around the water cooler (though it also helps that since I work from home, my water cooler discussions are with my dog and the deer that perpetually inhabit my backyard). But for cases like Breaking Bad, in which I happened to begin watching a week before its series finale, I dropped off the face of the Earth. Conversations with friends usually began with something like, “Okay, I’m only on episode four of season two – DON’T SAY ANYTHING,” and I avoided social media and film and television sites with the resolve one normally reserves for avoiding a past love at a mutually favorite restaurant.

Thankfully, with the exception of The Crying Game, I have had the pleasure to experience many other films with notable and unusual twists without prior knowledge. The Usual Suspects, Memento, The Vanishing, The Sixth Sense,Oldboy, The Secret in Their Eyes, Drug War, Being John Malkovich, The Game, American Beauty, Inception, Eternal Sunshine of the Spotless Mind, and many others, benefit from entering the cinematic world somewhat clueless about what lays before you.

And yet for all of my protestations at watching films in which I already know key details, of course, there are the exceptions. I originally began writing this article because I wanted to review When Harry Met Sally…, a film with an incredibly recognizable and oft-quoted scene, an effectively paint-by-numbers storyline, and “surprises” that should only be surprises if you have never seen a romantic comedy before. Essentially, When Harry Met Sally… contains everything that I try to avoid. But the magic of cinema tells us it doesn’t even matter. We don’t always need to be surprised. We don’t always even want to be surprised. We generally want the good guy to win, the bad guy to lose, and all of the romantic strings to be tied up neatly at the end. Catharsis.

Nearly everyone has seen or heard about the most famous scene in When Harry Met Sally…. Harry (Billy Crystal) and Sally (Meg Ryan) are eating lunch in a restaurant when Sally vocally demonstrates her ability to fake an orgasm. A hush falls over the bustling restaurant as Sally’s moans and groans and spastic shudders fill the room. Harry looks on with confused concern then an embarrassed acknowledgement of her skills as her squeals of delight grow louder and louder. Finally, Sally finishes and an older woman who is looking on (played by director Rob Reiner’s mother) tells her waiter, “I’ll have what she’s having.” The classic scene has been quoted and replayed exhaustingly since the film premiered and is probably recognizable to most causal film viewers even if they haven’t actually seen the movie.

Yes, When Harry Met Sally… hits all of the normal rom-com plot points, but it doesn’t even matter when the story is so enjoyable. Everyone knows before they see the movie that Harry and Sally will eventually be together. It’s in the title! Throughout the film we see clips of elderly couples happily explaining the origins of their relationships. We know Harry and Sally will be a couple. We know they will be cutely explaining their own origin story at the end of the film. This is not a movie that will contain surprises, and we know this, and we don’t care.

At times I find myself watching a film and critically analyzing it past the point of enjoyment. A few too many missteps, and the film becomes unwatchable. Sometimes it’s important to remember to relax and let yourself enjoy the company of the characters onscreen. You may be able to predict where they are heading, but that doesn’t mean the journey will be an unenjoyable one. We know that Harry’s girlfriends and Sally’s boyfriends always have the kinds of issues that will keep cinematic couples from ending up together. We know that Harry still struggles to get over his the dissolution of his marriage, and we know that Sally realizes she loves Harry before he realizes it himself. We like seeing the two of them interact over the years. The first time they meet is as acquaintances; they are two mildly annoying young collegiate aged adults who randomly happen to be sharing a ride together across the country. Later, five years later and in the beginnings of their careers, they stumble upon each other on a flight, but it still isn’t time for them to be together. Harry is engaged to be married and Sally has a promising new boyfriend. Finally, after another five years, they cross paths again, but this time as newly single, mid-career professionals with a bit more experience in the world of romance. Sure, they go back and forth as friends for a while, but the clock ticks for both and, in classic film fashion, they eventually realize they can’t stand not being with the other. 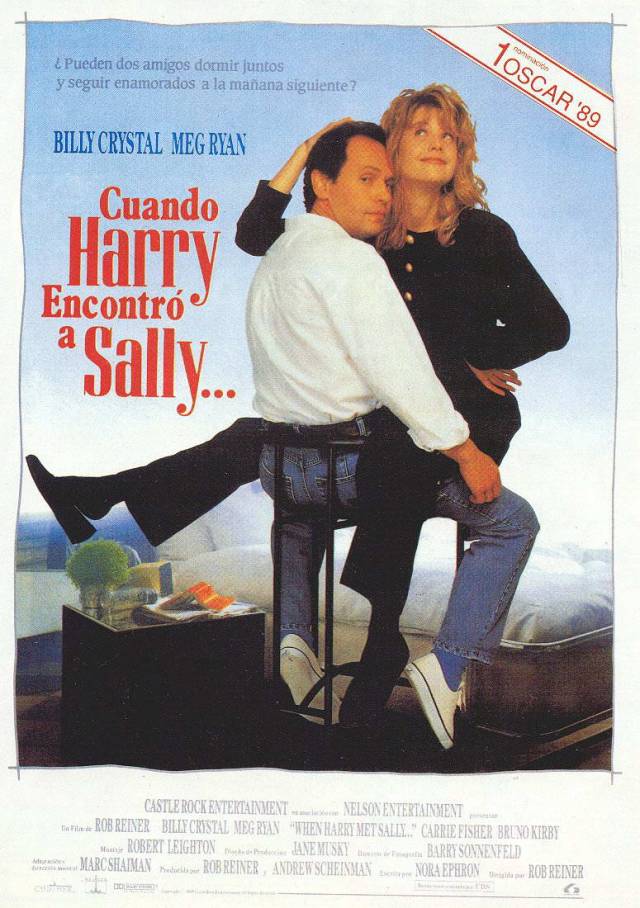 Okay, the film is formulaic, but it’s also charming, funny, and surprisingly relatable. Harry and Sally enter the story as young adults and as opposites, but with time their edges soften, their flaws smooth out, and they graduate into the realistic world of professional singles in their thirties. They’re a little less naïve, and they’re a little more guarded, but they are still the same people the audience first met. Of course, they are going to fall madly in love and live happily ever after and all of that, that’s not a question; it’s an accepted fact once you begin watching a film like When Harry Met Sally…. The fun comes from comfortably enjoying the company of the characters and watching their on-screen romance bloom. And for every brilliantly Autumn walk through the falling leaves or snowy scene around Christmas, Louis Armstrong, Ella Fitzgerald, Harry Connick, Jr., or some other name brand jazz musician fills the soundtrack with the kind of light music that seems to exist only in time capsules and in these films. But it works. We accept it because everything is so damn comfortable.

There isn’t any danger in my viewing queue filling up with rom-com’s. Although there is a special place in my heart for The Bodyguard, at the end of the day the limitations of the genre keep it from ever being one of my favorites. The comfort of an old friend or lover brings the same contented feeling as a pleasant rom-com, but also its disadvantages. You know your old friend intimately, and the comfort is the comfort of many minutes or days or years condensed into one moment when you look back into her eyes. But that knowledge also carries with it the truth of the matter; there is a complete lack of surprise and originality. You can predict how your friend will act before she acts. You know her thoughts and her beliefs and her mind and her body intimately and completely. The potential for newness is absent. Can I ever settle down with a well-worn film or book and sufficiently enjoy it until the end of times? Or do I always need the surprise of the unknown? These questions are not rooted only in my mind, but in the minds of many Americans and in the mind of Harry. The youthful Harry sleeps his way through New York, then marries at the appropriate time, then divorces soon after. He returns to the single world a bit more humble and a bit less particular and a bit more envious of the comfort of stability.

There’s a lesson in here somewhere, but I just can’t put my finger on it yet. Check back in five years, please.