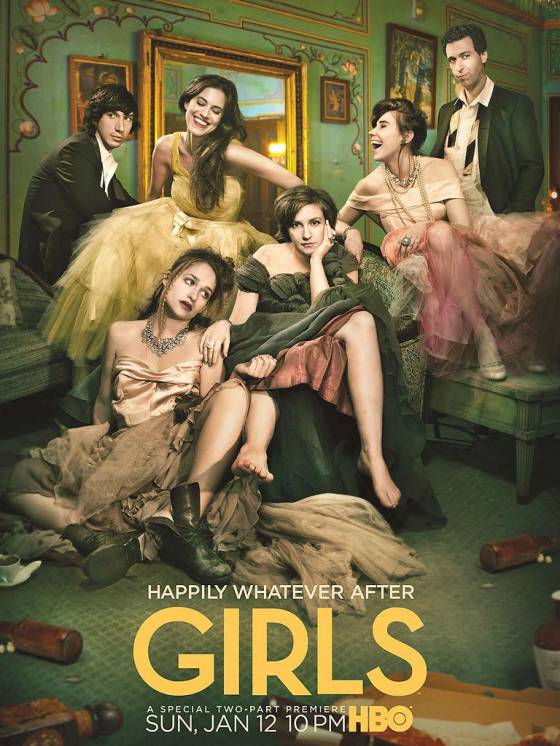 Girls, we hardly knew ya. You had a beautiful two season run. A beautiful collection of awkward stories and mid-20s confusion and apathy and interest in all the right places.

And, sadly, at this time we ring the bell – the death knell that is. Girls, season three, has officially “jumped the shark.” Feel free to cry or whine or beg or steal. Feel free to gloss over the weaknesses of this season. Feel free to deny and curse and shout and stand up bellowing, “No! Girls is still a great show! Season three was the best yet! I can’t wait for next season.”

Ah, you’re so young, it’s precious. You truly don’t know yet what is in store for you, do you? This is only the beginning of the slide into insignificance and cancellation. Greater shows than Girls have reached this point and have weakly limped along for another two or three or even four seasons, as the critics slowly depart for greener pastures and the audience quickly runs for newer, fresher excitements, and with only the most rabid of fans and the ones who have too much free time  and the people who are paid to watch and write about these shows left in front of their televisions and computers to watch the final episodes of yet another depressingly weak season.

And there is no escape.

Somewhere in the midst of season three it became apparent that there were very few characters that were actually interesting. That isn’t the kind of realization you want flying into the heads of your audience.

It’s sort of the same problem I have with Eastbound & Down‘s third season and with other television shows that begin to wither after a couple of stellar first seasons. The show becomes complacent. They seem to forget what made them unique and why audiences are tuning in to watch them and not something else.

We watch Girls for the painfully awkward, hilarious situations. For the confusion. For the bizarre story lines and unusual characters. And, of course, because we want to spend time with these people.

And yet, over the course of season three we go away from all of that. Girls stopped being funny and (other than a few minor moments) stopped being painfully, painfully awkward. (Painful awkwardness is a thing that Girls was built upon and excelled at AND made them different [or at least in the similar realm of Eastbound & Down] so why make everything so nice and neat all of a sudden?)

It just became more of a chore than it was a source of enjoyment. All of the characters (with perhaps the exception of coffee shop Ray or Adam [hmmm… the most consistently interesting characters are two males in a show called Girls… is this because I, myself, am a man or because the female characters truly are fucking annoying?]) are more pleasant when they are not onscreen, and the characters that are enjoyable – Lara Durham’s editor, Rupert E. Grant, Adam’s sister – are only guest stars and don’t last long. The first died, the second popped up in the beginning of the season and now the end, but sadly won’t be lasting, and the third is now missing and I can’t even remember where she went.

So, relating Girls to Eastbound & Down. These are two shows that had lots of promise before sputtering out.

Eastbound & Down. Man. I really thought you had more to you than what you gave. You were the epitome of insane arrogant awkwardness. You owned that! You owned that niche sub-genre! But you let it all wash away in the face of normalcy and a revert to the standard routine of every other 30 minute sitcom. No!

I liked Eastbound because it was fucking crazy. You never knew where it was going. If I had to say where the shark jumped I would even say it was the second season. The third was better, but still hopelessly tame compared to the insanity of the first.

Perhaps you expelled too much energy in the beginning?

So, we salute you Girls and you Eastbound. Two shows who have begun the plummet into the depths of normalcy. Next stop: Dom’s Apathy.

And as a final word –

I just looked up and saw Girls actually has two more episodes… shit. Whoops! But I stand by my decision. (Although the score may change depending on what happens.)